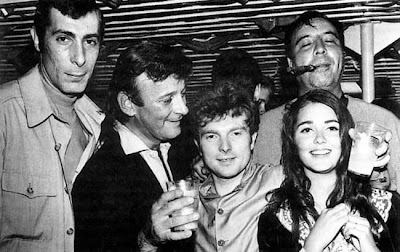 In 1985, Van Morrison joined Alcoholics Anonymous, his drinking—and the belligerent behavior it sparked—having reached a crisis level. He wasn't particularly keen on the experience; allegedly his own fame impeded the healing process. Said Morrison: "I had to say to people at meetings: 'I don't give a fuck whether you've got the [last] album or not. I'm here because I think I've got a drink problem."

Had Morrison stuck around, he possibly would have made a hi-my-name-is-type revelation like the one he once managed with journalist Ritchie Yorke. This is Morrison at his most confessional. (This quote would probably also make one kick-ass drinking toast.)

The heaviest dope I ever did was alcohol. I've done stuff like hash and grass, which isn't really heavy dope. But alcohol is a different story—it's a real heavy drug, a real motherfucker ... In Ireland, everybody drinks. Nobody gives it a second thought. You're Irish, number one, and you're a drinker, number two.