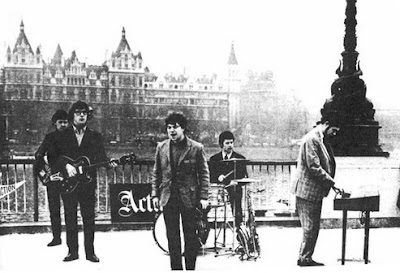 It's becoming increasingly more difficult to imagine, but there was a time (honest; there was; I can still recall it)—before the Internet made the idea of infinite interconnectedness a multi-linked, hypertext reality—when it was possible to be isolated, bored, marginalized, unconscious, cloistered. Growing up in my Eighties, suburban bubble, I often felt like a hermit. Growing up in 1950s Belfast, Van Morrison must have felt like a hermit living in a Plutonian cave with his eyes squeezed shut and his fingers jammed in his ears. Clinton Heylin—author of the Morrison biography Can You Feel the Silence?—wrote of how shut off Northern Ireland was from mainstream British pop culture and music. In the '60s, as Them rose to prominence, there was allegedly just one recording studio in the entire province. Located in Belfast's Cromac Square, the studio was situated above a solicitor's office, which meant artists could only record in the evening after the office had closed. Said Peter Lloyd, who managed the studio: "We had a Revox. Five mikes, no EQ, no compression." Further evidence of how ass-backwards Belfast's music infrastructure was in the 1960s: One of Them's first breakthroughs was playing noontime sessions at the Plaza in the city center. The crowd was primarily comprised of indifferent, droopy-eyed office workers on their coffee breaks. The 100 Club this was most definitely not. Beyond the Northern Irish capital, the situation was no more promising. Heylin wrote of how there existed "plenty of places outside the city [Belfast] where 'She Moved Through the Fair' was still considered a contemporary ballad." For much of Northern Ireland, the status quo was antiquated folk music, as well as showbands specializing in cover songs. Meaning Morrison and Them had to chip away at generations-old barriers even more persistently than British rock peers headquartered in more sophisticated locales.
Posted by Unknown at 8:19 AM