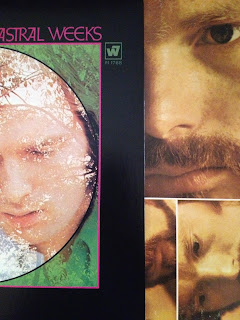 I've read a teeny-weeny bit about "solitarist" theory, which views human beings as members of one group and that membership in this one group goes a long way toward shaping human identity. Some blowhard once wrote that the theory that we can be sorted, filed, and stored in such a manner leads to a "miniaturization" of humanity, where people are locked up in tight, little boxes, only to emerge to attack one another. Which tight, little box do you lock yourself in: Morrison's Astral Weeks or Moondance? No vacillation is allowed, no fickleness, no "a little from Column A, a little from Column B." One album butters your toast infinitely more than the other; that's just the way it is. Also—and this isn't just the bloody solarists talking—people (very important people, actually) will tell you that ultimately, your choice not only says a lot about who you are as pop music fan, but also says a lot about who you are as a person. From a book or an essay or a bathroom stall I can't remember:

Masochistic fans of despair all love the desolation of Astral Weeks, while optimists prefer the lighter moods of Moondance.

The yang to Astral Weeks' yin, the brilliant Moondance is every bit as much a classic as its predecessor; Van Morrison's first commercially successful solo effort, it retains the previous album's deeply spiritual thrust but transcends its bleak, cathartic intensity to instead explore themes of renewal and redemption.

From an interview involving writer Hank Shteamer and Lewis Merenstein, who produced Astral Weeks and shared producing credits with Morrison on Moondance:

Shteamer: When you were thinking of bringing Richard and the other musicians back, were you thinking of making Moondance a similar thing to Astral Weeks? Merenstein: No, no, no, only Richard, not the rest of the muscians. This was a different thing; this was a poppish type of thing