"The avenue of trees" 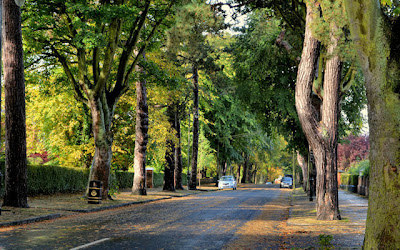 I've ambled up and down Ireland's west coast, from Donegal Town to Kinsale with prolonged stops in between. I've cut across the island's mid-section, from Galway to Dublin and back again. I've long believed the most striking characteristic of the Irish landscape—after the stone field walls, of course, all 240,000 miles of them—is the near-total absence of trees. You will probably take note of this before you take note of the walls. The Irish countryside always leaves one conflicted: Bursting with green, one of the most effectively soothing colors, the land calms physical and emotional tremors; at the same time, the vast chasms of space produce twinges of desolation and inadequacy. One senses the sweet hope of forgotten harvests—and the cold hush of tiny graveyards. Perhaps it's why the yearning to emigrate is just as strong as the longing to return. What I find remarkable is that despite its near absence from the Irish landscape, the tree holds a prominent place in the Irish consciousness. Maybe the island's inhabitants believe that a collective spirit of reverence toward the tree will atone for centuries of unchecked despoiling. (Quick aside: From what I understand, a number of human factors contributed to the island's deforestation: a history of unstable land ownership, which did not allow for long-term woodland management; England's yearning for timber to support its booming shipbuilding industry in the 16th and 17th centuries; the need for charcoal to fuel Ireland's 17th and 18th century iron works; the population swelling to over 8 million in the 19th century, leading to vast areas of forest being cleared for fuel and shelter.) For example, the early Irish tribes each grew a sacred tree in the immediate vicinity of their royal inauguration sites. These trees even had a name. From Niall Mac Coitir's book, Irish Trees: Myths, Legends & Folklore: "With regards to the important place of the sacred tree in Ireland, there is even a special word in the Irish language to describe it, namely a bile. Examples of the bile marking an important place can be found all over Ireland." There are multiple versions of an ancient tale that says nine hazel trees grow at the source of the Rivers Boyne and Shannon, dropping "nuts of wisdom" into the water. During the Celtic festival of Beltane, typically held in early May, boughs of mountain ash were hung from the windows and doors of homes. From the wonderful Diary of an Irish Country Wife blog: "My grandfather, long dead now, was a great believer in the fairies and the old folklore. A Co. Longford farmer, he would plough a wide circle around the lone hawthorn tree in his field, for fear of offending the fairies that supposedly inhabited the tree. It was widely held that disaster would befall those who dared to dig up a hawthorn tree." Meanwhile, Cuchulainn fought with holly spits (spears). Fionn Mac Cumhaill was held captive by Midac in the Palace of the Quicken Trees. From David Willis McCullough's Wars of the Irish Kings: "It [the Palace of the Quicken Trees] stood on a level green, which was surrounded by a light plantation of quicken trees, all covered with clusters of scarlet berries." Half the letters in the ancient Ogham alphabet take their names from trees. Many Irish place names pay homage to trees. Derry, the island's fifth largest city, takes its name from an Anglicization of the Irish name Doire Cholmcille, or Colmcille's oakwood. According to legend, the first monastery the warrior-saint founded was in an oak forest near Derry. And consider William Butler Yeats' "The Two Trees." Addressed to his love, Maud Gonne, Yeats' poem considers the interminable skirmishes that take place between our active and contemplative selves.

Similar skirmishes occur in Van Morrison's best work. Such as "Cyprus Avenue," an ode to a cherished destination of Morrison's during his adolescence. Morrison refers to the East Belfast thoroughfare as "the avenue of trees," a reference to the street's large trees, which spout from wide sidewalks, providing generous helpings of color and shade. Morrison's own Hyndford Street was largely absent of vegetation of any kind. Here are two emails I received from Jonathon Pilcher, a professor from the School of Geography, Archaeology, and Palaeoecology at Queen's University in Belfast. Pilcher is also the web manager for the Friends of Belfast Botanic Gardens site.

Hello Ryan, I have no definitive answer for you. I had assumed that Cyprus avenue was named for Cypress trees - ie something like Cupressus macrocarpa. I don't live on that side of Belfast, but if I am passing that way in the future I will check. As to what trees are common in city streets here, the two commonest are lime (Tilia x europea) and London plane (Platanus x acerifolia). Recently some newer trees such as the columnar oak and some hornbeam varieties have been planted.

Hello again, I wasn't sure from the photos so I went to Cypress Av this afternoon to look. There is a mixture of trees. There are about half and half Austrian pine (Pinus nigra) and common lime (Tilia x europaea). There are also 2 horse chestnuts and two or three sycamore (the European one - Acer pseudoplatanus). The Pines are huge and may be among the oldest street trees in the City. There are some new pines planted in gaps, probably in the last few years. You can see both the pines and limes in the photos you sent.

Professor Pilcher also speculated that the Austrian pines—a species not native to the British Isles, though it thrives in Northern Ireland—on Cyprus Avenue are 80 to 100 years old, meaning Morrison likely strolled underneath these very trees. And that's what I believe the trees partially represent in "Cyprus Avenue": permanence, an immortality that children mirthfully crave ("Someday I want to come back to life as a tree!"), the notion that even though individual existence will one day be snuffed out like a candle, some things will endure in perpetuity. The trees also symbolize the promise of change, the inevitably of remaining ourselves yet becoming someone very different, the irrepressible passage of time that the young Morrison was only beginning to experience. Our personal development is reflected in the seasonal transformations identified in a tree. A sycamore sprouts clustered, pale green flowers in the spring, then five-lobed leaves shortly afterward. In the fall, the leaves turn a crinkly brown and die, joining the tree's winged fruit in falling to the ground. The tree becomes dormant in winter and then the whole process starts over. It's a complex life cycle neatly packaged into one year, a life cycle that we actively encounter as we journey through our very own. I see an adolescent Morrison tossing handfuls of the sycamore's winged fruit in the air and gleefully watching them helicopter to earth—and leaving the adults to sweeping the bronzed, curled leaves into neat piles and then unceremoniously cremating them.
Posted by Unknown at 5:33 PM