Tendrils in a grapevine wreath 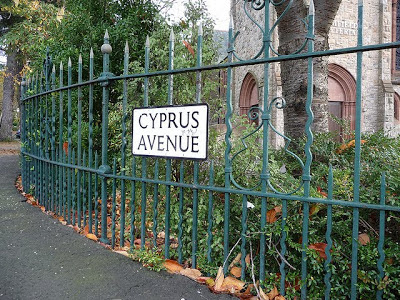 Picking up where I left off yesterday ... One could argue Cyprus Avenue's trees are emblematic of East Belfast's class differences: less-privileged, working-class Hyndford Street doesn't contain any trees; middle-class Cyprus Avenue does. Yet I've never considered this to be Morrison's intent in emphasizing the trees' existence. Belfast's stark dividing lines (both of the class and sectarian variety) were decidedly overlooked on Astral Weeks. Instead, on "Cyprus Avenue" I believe Morrison is simply awakening to the knowledge that some places are very different than the places where one is from and that these differences are certainly predicated on physical characteristics (in this case, trees) or the individuals settled there, but also on how these quote/unquote different places make one feel, how they allow one to breathe in ways they wouldn't normally breathe and think in ways they wouldn't normally think. Or how these places allow for previously unimagined growth: how a moment of uncertainty in these places uncovers an aspect of one's self that was previously hidden or how a bout of disappointment recalibrates one's efforts to reach a particular goal. Or how the sights and sounds and smells become so fiercely alive that following departure, the senses that perceived them are exhausted and dulled. Or how these places and the emotional responses elicited there become so elaborately intertwined, like the curling tendrils in a grapevine wreath, that it's nearly impossible to untangle them and over time, they became immediately and irrevocably associated with that place. Inevitably, Morrison began to carry Cyprus Avenue inside him, back to where he was from, to other places even, and it was etched so deeply it endured long after the reasons he first ventured there abandoned him.
Posted by Unknown at 9:44 PM