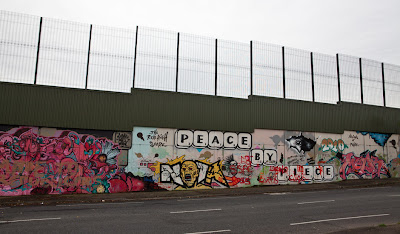 I'm looking at the blurry photo I snapped as we sped through the gate of one of Belfast's notorious "peace lines." We were zipping down Lanark Way, away from the Catholic Springfield Road and toward the Protestant Shankill Road. The photo was taken through the smudged, cracked back window of a Black Taxi, so it's difficult to provide details, but it appeared each side of the gate featured a painted mural: for the Protestants, an aquarium complete with bug-eyed fish; for the Catholics, a collage of images including a boxer and two lads sitting atop an over-sized boombox. Belfast's first barriers went up in 1969. Constructed by British Army engineers, they were designed to separate Catholic and Protestant enclaves, and help quell the growing violence between the two communities—violence eventually labeled the Troubles. (Gates like the one we drove through are closed and locked at night.) But as history has demonstrated, walls are far easier to erect than tear down. Today, 14 years after the landmark Good Friday Agreement, the number of peace lines in Northern Ireland has grown to nearly 100. According to Alan MacWeeney & Richard Conniff's Stone Walls & Fabled Landscapes, there is approximately 240,000 miles of field walls in Ireland—more than any other country in the world. They are typically composed of limestone, granite, and sandstone. In Belfast, the building materials are far different: corrugated metal and concrete block. In the book, MacWeeney & Conniff quote an elderly man from the island of Inisheer, where field walls have become an immutable part of the landscape as assuredly as the peace lines have in Belfast. "Walls are more important than people," the man said. Certainly, but only when the communities they separate or surround allow them to be. Though Van Morrison and others he grew up with contend that their largely-Protestant East Belfast neighborhood was relatively free of the sectarian tumult that plagued other areas of the city, there are peace lines roughly a mile away from Morrison's childhood home on Hyndford Street. Both the brick-and-mesh-fencing walls along Bryson Street/Thistle Court and Cluan Place/Clandeboye Gardens were erected at some point during the 1970s, far and away the Troubles' bloodiest decade. Throughout his adolescence and well into adulthood, Morrison was often guilty of withdrawing behind walls. Belfast was as well, though on a much larger, more consequential scale.
Posted by Unknown at 6:45 PM