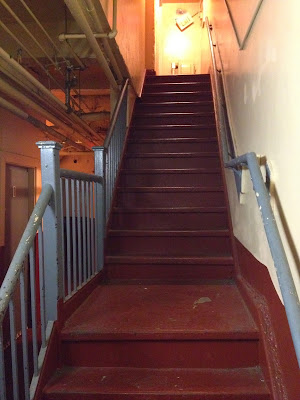 Liz Lupton, a publicist at Berklee College of Music, wipes her feet on the sidewalk, a gesture akin to someone vigorously wiping their shoes on a doormat following a long walk through heavy mud. We breathe in the late autumn air, squint as our eyes adjust to the afternoon daylight. "I went to college in Indiana and lived with four girls," Lupton tells me, "and our place wasn't nearly as gross." Lupton and I are standing outside 1120 Bolyston Street in downtown Boston. The busy block is part of Berklee's sprawling urban campus; students dart past alone or in groups, carrying unwieldy instrument cases and oversized knapsacks. Had I the need to form a competent backing band, a 30-second canvassing of my immediate area would have unearthed all the necessary musicians (I may have even saw a flugelhorn). My thoughts suddenly turn to Van Morrison and how he just did that—right here, at Berklee, one of the world's most prestigious music schools. And how night after night for months, a pair of young music students followed him through the battered door behind me, down a long set of stairs and onto a tiny stage, where they performed to crowds of varying degrees of size and enthusiasm. I'm standing outside 1120 Bolyston Street, site of an old music club known as the Catacombs. If the place where Astral Weeks' heart began beating was Morrison's cramped bedroom in Belfast, then it was here at the Catacombs that the album took its first sharp breaths. More to come ...
Posted by Unknown at 9:19 PM