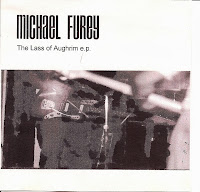 From James Joyce's "The Dead":

Gabriel had not gone to the door with the others. He was in a dark part of the hall gazing up the staircase. A woman was standing near the top of the first flight, in the shadow also. He could not see her face but he could see the terracotta and salmon-pink panels of her skirt which the shadow made appear black and white. It was his wife. She was leaning on the banisters, listening to something. Gabriel was surprised at her stillness and strained his ear to listen also. But he could hear little save the noise of laughter and dispute on the front steps, a few chords struck on the piano and a few notes of a man's voice singing.

He stood still in the gloom of the hall, trying to catch the air that the voice was singing and gazing up at his wife. There was grace and mystery in her attitude as if she were a symbol of something. He asked himself what is a woman standing on the stairs in the shadow, listening to distant music, a symbol of. If he were a painter he would paint her in that attitude. Her blue felt hat would show off the bronze of her hair against the darkness and the dark panels of her skirt would show off the light ones. Distant Music he would call the picture if he were a painter.

Gretta, we're informed, was listening to "The Lass of Aughrim." Saturday morning, as the strains of "Beside You" played softly in my subconscious, gleefully trapped in my bed, a book balanced on my chest, I pretended rather foolishly that Gretta was paralyzed by Astral Weeks.
Posted by Unknown at 8:09 PM