Truly deserving of the name 'the Catacombs' 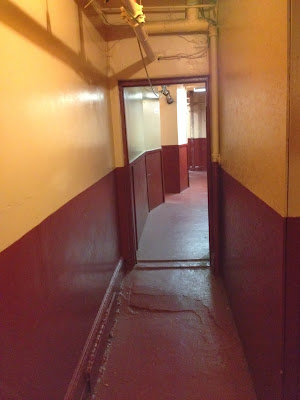 So I'm sorting through the bits of conflicting information I have received regarding the whereabouts of the Catacombs. Bear with me here ... When I met with Liz Lupton, publicist from Berklee College of Music, I had the honor of getting a full tour of her office, which is located on the second floor at 1126 Bolyston Street. During my visit, Lupton, as well as a co-worker of hers with extensive knowledge of the Boston music scene, said they were quite confident their office space was the former site of the club. When Lupton and fellow Berklee employees moved into the location roughly a year ago, they were informed that a well-known live music club was once situated in the office space directly above 1120 Bolyston (a piece of information, according to Lupton, that absolutely thrilled the musicophiles in her office). When Lupton saw my email about the Catacombs and 1120 Bolyston, she naturally concluded that the venue I was inquiring about was the one formerly located at her workplace. However, after leaving her office, slinking through the street-level door that sits at 1120 Bolyston, and exploring the spaces one and two stories below, Lupton felt differently regarding the Catacombs' true location. And I couldn't help but agree with her. The subterranean expanse beneath 1120 Bolyston, with its labyrinthine hallways, musty darkness, and slight air of secrecy, was truly deserving of the name "the Catacombs." Here is further proof that this underground setting was where the club resided: This is information I received from Doug Ferriman, founder and CEO of Crazy Dough's Pizza, which has a location at 1124 Bolyston St.:

Its funny you ask about the catacombs. I tell stories about that place all the time! Long story short, the space was handed down from band to band over the decades (the last band being close customers of mine) and served as an underground musician/band hangout/jam venue. It was very cool down there, old stage, an old bowling alley way back when it was a jazz joint ... The space has been broken out into multiple rehearsal studios for Berklee and Conservatory kids. I don't think there is any characteristics left of the old hang out. It is owned and operated by the Hamilton Company ... I believe I am one of the last people down there before it was gutted. My memento was an old steel drum I always eyed on the wall, so it was nice when the guys gave it to me.