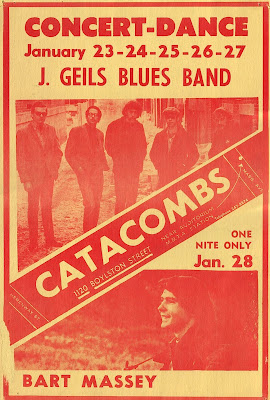 Still scouring the Internet for information on the Catacombs, the Boston club where Astral Weeks took its first sharp breaths, where Van Morrison collaborated with a pair of Berklee College of Music students—upright bassist Tom Kielbania and flautist/saxophonist John Payne—before New York City and Century Sound Studios beckoned. Harry Sandler, co-founder of the Music Museum of New England and one-time drummer for the band Orpheus, provided me with a bit of background. Carl Tortola, webmaster for the museum, recommended I get in touch with Joe Viglione, who was involved with the Boston music scene in the '60s and '70s. Joe linked me to a gig poster for the J. Geils Blues Band. The group performed at the Catacombs during January of 1968 (Morrison and company played that summer). However, Joe had little else to offer other than names. One was Rick Harte, who responded to my query with this:

Hi, Ryan. I remember going there. It was down several flights of stairs. I didn't go there much. But it's true: Van Morrison lived in Cambridge for a long time. On Green Street, Kirkland, or Kneeland. I'm a huge fan of Them and the early Van Morrison solo years. While I was around then and would see him, it's still way over 40 years ago and memories are frayed.

Another contact, Jason Brabazon, was also contending with frayed memories:

It's funny (peculiar), a lot of times, even tho' I'm sure I remember where something (in Boston; music-related or otherwise) used to be, it turns out my memory has failed me. I was certain I remembered where the entrance to Paul's Mall & the Jazz Workshop was, but when I found an old ad showing the Boylston St. address, I was way off! I think (in retrospect) that I was in fact remembering where the Unicorn Coffee House used to be. When I was a kid (single digits), my mum and her friends used to talk about this sort of thing (like where Scollay Square used to be or such-and-such a restaurant before they tore it down) and I remember thinking: I'm glad I'm not so old that my world has evaporated around me. But now, here we are ... I'm sorry I can't be of more help. I was around when he lived here (Green Street), but it's not like we hung out or anything. I remember him playing a free concert on Boston Common and singing "Rain, rain, go away." I think to the tune of "Ro Ro Rosey." I may still have the flyer somewhere. It was billed as the "Van Morrison Project" or something like that. At first I wasn't even sure it was really the actual guy. I thought it must just be the name of some band; like if you saw a billing for a band called the Bela Lugosi Initiative, you wouldn't expect it to actually be the Bela Lugosi. And what would someone as big and famous as Van Morrison be doing playing for free?