I suppose it's impossible to curate a blog that casts a penetrating eye on a city blighted by centuries-old sectarian hatreds and never explore matters of religious doctrine and faith. So here we go ... Two recent essays analyze the notion that individuals heavily immersed in religion suffer from a dearth of creativity. From Rod Dreher's piece:

We live in a time and a place in which people with creative gifts are enveloped by an ethos of expressive individualism, a way of seeing the world that rejects accepting the disciplines of religion and tradition, and poses them as threats to creativity—which, for the artist, means a threat to his sense of self.

Of course, Dreher does write in generalities (as does the author of the other essay I linked) and is quick to deliver the caveat that there are obviously creative types who use their hands to clasp prayer beads just as often as they use them to work with clays, and that embracing atheism will not punch your ticket to the Met. Nonetheless, both writers draw conclusions that I find myself arriving at whenever I infrequently contemplate what sparks creativity and what stymies it. Creativity thrives on confrontation, curiosity, and change. Creativity embraces what's prickly and strange, and in extraordinary instances, what's dangerous. Creativity flourishes when a particular kind of emotional responsiveness to the world—one that's pure, impartial, and a tad sophisticated—is not only permitted, but encouraged. The religious mind? It can offer resistance to the influences detailed above. It's a product of static restrictions and tightly-held covenants and a colorless stability where no questions are asked. Religion is wonderful at encouraging a rather empty single-mindedness. I'm reminded of a quote by a German theologian and philosopher named Meister Eckhart: "If you focus too narrowly on a single path to God, all you will ever find is the path." 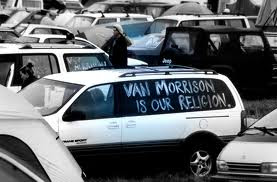 How does all of this apply to Van Morrison? Well, the singer-songwriter was raised by an atheist father and a mother whose dalliance with the Jehovah Witnesses was attributed more to a quest for self-improvement rather than atonement for her soul. ("I wouldn't describe my mother as religious," Morrison said. "I think that would annoy her. She's a free-thinker.") Morrison was raised without the doctrinal baggage countless others from Belfast carry. His faith was rooted in a passion for creative thinking and self-expression, rather than narrow creeds and dogma. Outside the confining perimeters of religion, he pursued the belief that one can be wholly spiritual without being fiercely devout. Astral Weeks is a brilliant testament to this.

"I saw so many Catholics and Protestants for whom religion was a burden," Morrison once observed. "There was enormous pressure and you had to belong to one or the other community. Thank God my parents were strong enough not to give in to this pressure."
Posted by Unknown at 8:01 AM