Tilting my head back

Here is Greil Marcus ruminating on Astral Weeks. This was from his rather underwhelming and error-prone book on Van Morrison, When That Rough God Goes Riding:

It was forty-six minutes in which possibilities of the medium—of rock 'n' roll, of pop music, of what you might call music that could be played on the radio as if it were both timeless and news—were realized, when you went out to the limits of what this form could do. You went past them: you showed everybody else that the limits they had accepted on invention, expression, honesty, daring, were false. You said it to musicians and you said it to people who weren't musicians: there's more to life than you thought. Life can be lived more deeply—with a greater sense of fear and horror and desire than you ever imagined. That's what I heard at the time, and that's what I hear now.

Quick aside: Marcus' 20-page treatise on Astral Weeks—essentially the lone reason I purchased the book—left me unsatisfied upon the initial read, but became more thought-stirring upon subsequent ones. He references Bob Beamon's Olympic record-shattering long jump, which occurred a few weeks before Astral Weeks' November of 1968 release, illuminates the feat with language that could also characterize Morrison's landmark album—"It was an act for which there are no parallels and no metaphors"—and then ultimately attributes both the leap and the LP's singular greatness to a confluence of fortuitous events. (For Beamon, it was a favorable tailwind and Mexico City's high altitude. For Astral Weeks, it was Morrison being granted a temporary residency at the Catacombs in Boston and producer Lewis Merenstein first hearing a rough cut of the album's title track, and allegedly breaking down and weeping.) 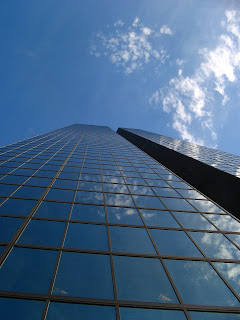 Back to the excerpt blockquoted above ... When I listen to Astral Weeks—or, to take a step back, sample other pieces of art considered at or near the pinnacle of their particular medium—I am reminded of childhood trips to Boston and how after walking to Copley Square I would stand at the base of the John Hancock Tower, the city's tallest skyscraper, and tilt my head back until my neck burned with pain and run my eyes along the structure's liquid surface, ever upward, until they reached the summit. The exercise left me feeling anxious and mildly threatened, inspired and euphoric. Astral Weeks is like a gleaming, towering monolith, a choice example of how when pop music brazenly disregards all boundaries, reaches up and grasps the seemingly unattainable, elicits a wide range of emotion reactions—how when pop music accomplishes all this, we, the listeners, are left feeling awestruck and humbled and maybe even swayed—just a smidgen, possibly a bit more—into believing that before we have departed this world we will produce our own tiny masterpieces.
Posted by Unknown at 7:36 PM