Encounters with ferry boats and the ocean 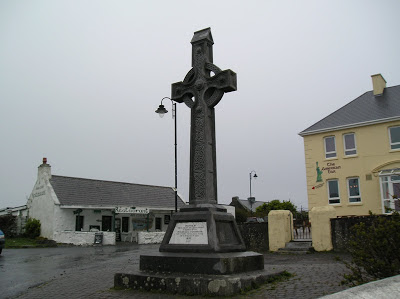 I own a copy of Going to the Well for Water, the published field diary of Seamus Ennis, who was an Irish musician and collector of folk songs. I have yet to read the book from cover to cover; for the moment, I'm content with opening to a random journal entry and reading for a time—or just long enough to whisk me away from here to whatever part of Ireland Ennis was visiting. Today, I read about the ferry boat trip Ennis took in June of 1946. His destination was Kilronan, located on the Inishmore, the largest of the Aran Islands. His second day on the island, Ennis called on a man named Sean Mhurcha de Bhailis, who provided Ennis with the lyrics to folk songs the previous year. De Bhailis is described by Ennis, rather poetically, as: "A tall, strong man. He sang often at weddings and at home. He died when he was over eighty years of age in 1965. He was rarely ill. Towards the end of his life his legs began to cause trouble." Ennis meets de Bhailis by the ocean. There, the islander informs the folklorist that his current despairing disposition renders him impotent in the ability to sing. "Do not ask me, Seamus," he cries to Ennis, "because nothing in the world will make me sing today, whatever is wrong with me." Then: "Some other time, please God." I consider de Bhailis' pleas, his vexations, his admittance of defeat. This is a bargain made with creativity, a begrudging acceptance that one's artistic limitations do not solely pertain to the power of what one writes or paints or sculpts, but also to how abundantly one can put pen to paper, brush to canvas, and chisel to marble. For every juncture in the artist's existence where the fount overflows with pristine and refined original expression, there are moments where the artist is left staring into a void. Or, to put it much more simply: Some days you got it, some days you don't. I also consider Van Morrison, who logged his own encounters with ferry boats and the ocean, and who also experienced occurrences where his capacity for personal expression fled like water into sand.
Posted by Unknown at 5:50 PM