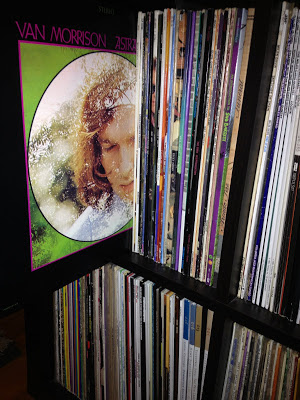 For sale right now on Amazon (price: $11.49; format: VHS cassette): Slipstream, a 1973 Canadian drama that not only takes its title from "Astral Weeks," but also includes the song in its soundtrack. Starring Luke Askew (of Cool Hand Luke and Easy Rider fame; not too shabby), the movie won the Canadian Film Award for Best Feature Film in 1973. Unsurprisingly, Van Morrison gave it two thumbs up—way up. From Ritchie Yorke's biography Van Morrison: Into the Music: "I think it's a great film. And I think that 'Astral Weeks' is in context with the film." Morrison also travelled to Toronto to be on hand for its official premiere. The movie's plot, courtesy of IMDB: "A reclusive Albertan DJ runs his popular pirate radio station in a remote farmhouse, but begins to feel pressure from his romantic relationship with a fan and his producer, who wants more mainstream content.” In Yorke's biography, Morrison goes on to say that the flick was "banned in a lot of places" on account of it exposing "a lot of the corruption in the music business." Hmmm ... Sounds a little dubious. At any rate, I believe this is the first instance of a song from Astral Weeks being featured in a movie. And other than the inclusion of "Sweet Thing" in a few motion pictures, I struggle to think of subsequent instances. I suppose that's the reason not a single track from Astral Weeks was included on this compilation.
Posted by Unknown at 4:38 PM